In 2013 a total of 861 samples of fresh fruit from conventional cultivation were analyzed at CVUA Stuttgart for the presence of residues of over 650 pesticides. Fully 806 (94 %) of the samples were found to contain residues from a total of 193 different substances (in 2012, 197 substances; in 2011, 184; in 2010, 169; and in 2009, 183). In all, there were 4,660 cases of quantitatively identified residues. Exceedances of the MRL were confirmed in 41 (4.8 %) fruit samples (see Tables 1 and 2). In comparison to the previous three years, the quota of violations was slightly higher (2012: 4.5%, 2011: 3.6 %, 2010: 4.2 %).
While the samples from Germany and other EU countries had fewer cases of MRL exceedance (9 of 265 (3.4%) and 12 of 259 (4.6%) respectively), the samples from outside the EU, the so-called third-countries, showed a somewhat higher rate of contamination: 19 of 312 (6.1%) samples contained levels over the MRL.
The newly included fosetyl (incl. phosphorous acid), which was added to the spectrum of investigated substances in 2012, was tested this year as well. Both of these substances are fungicides and are often used in fruit orchards. Due to the comparatively high average quantity of phosphorous acid detected (up to 47 mg/kg, see comparisons in Annex 1), the average amount of pesticide per sample is also accordingly high, similar to the situation with surface treatment substances. Therefore, Table 1 also presents the average pesticide content per sample without the inclusion of fosetyl (sum), and without fosetyl (sum) and surface treatment substances.

Many fruit samples were found to contain residues from multiple pesticides, in 2013 as many as 734 (85 %) cases (in 2012, 83%; 2011, 81 %; in 2010, 77 %; in 2009, 82 %; in 2008, 76 %). An average of 5.4 different substances per fruit sample were detected, whereby the distribution of the number of pesticides differed by type of fruit and country of origin. Tables 2 to 7 present the results of the residue tests differentiated by type of fruit.  Illustrations 1 to 5 show the situation with regard to multiple residues. The test results with reference to the frequency of substances detected in fresh fruit can be found in Annex 1.

Highlights from 2013 (see the following Internet articles under www.cvuas.de)

The newly discovered contamination of foods with perchlorate, as well as the problem with the herbicide chlorate, the cause of which is not yet known, are not subjects of this report.

Not all types of fruit were equal in terms of MRL exceedance: all of the pome fruits were in accordance with the regulations, while approximately 10% of the exotic fruit samples were in violation (see also Table 2).
Fruit samples grown in Germany were also examined with the object of ensuring that the detected substances are authorized for use with the particular matrix. The most conspicuous cases of nonconformity were for currants (six samples) and table grapes (nine samples). As long as the substances are authorized and the maximum residue limits are adhered to, the food products may be marketed. The situation will be followed, nevertheless, by the responsible plant protection authorities.

* MRL=Maximum residue limit; ** Investigations based on existing regulatory approval are conducted only for German samples; *** Data too limited for statistical analysis. 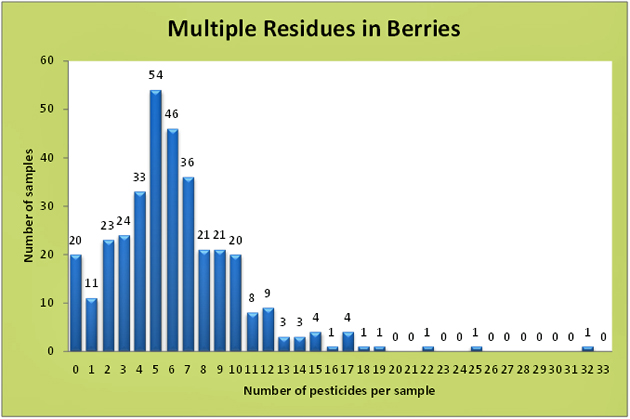 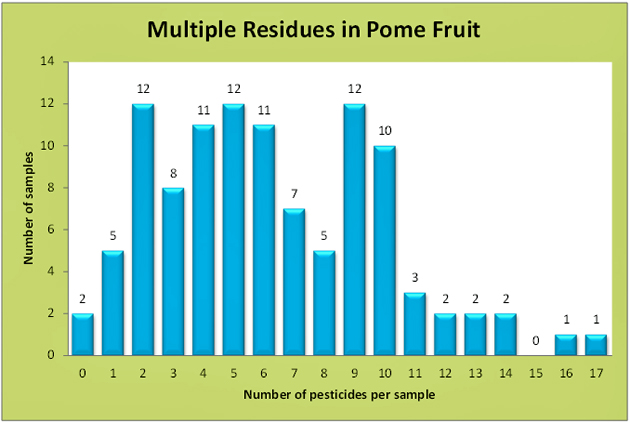 The two samples with the most substances were a Spanish pear with 16 different substances and an apple from Germany with 17. Both samples adhered to the valid maximum residue limit. 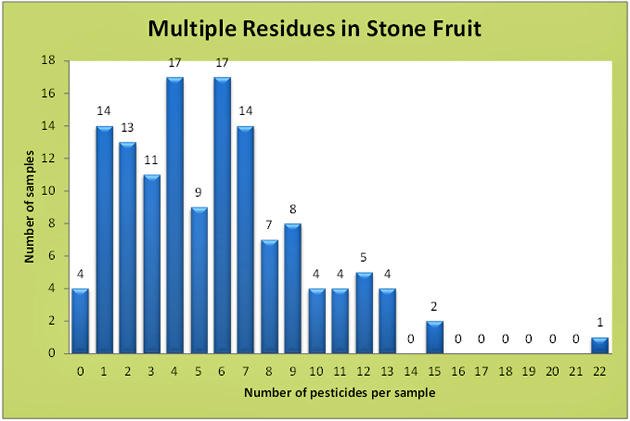 The sample with the largest quantity of different substances, a total of 22, was a sweet cherry from Turkey, although all of the pesticide amounts were under the legal maximum residue limit. 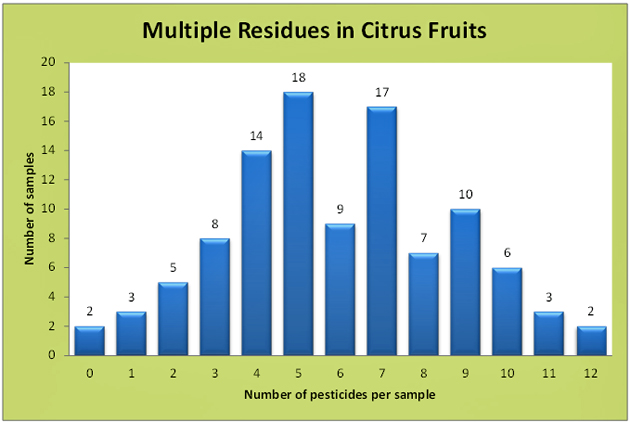 Limes from Brazil and lemons from Turkey contained 12 different substances each. The amounts for all were under the maximum residue limit, however, and thus in accordance with the legal regulations. 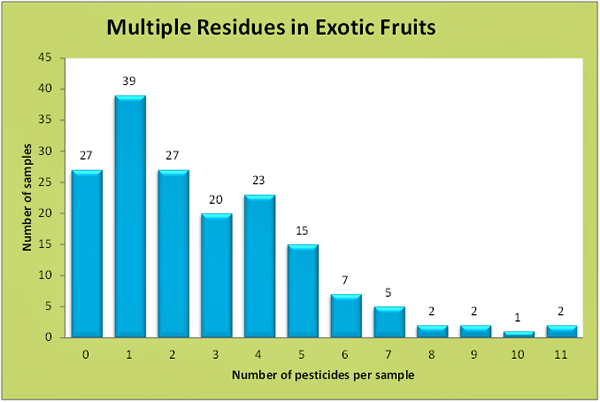 One papaya from Ecuador and one from Brazil contained 11 pesticides each. The sample from Brazil had the substances chlorfenapyr and fenpropathrin in amounts that exceeded the maximum residue limit and were therefore not marketable.